Eastport has two exploration licences in the Jwaneng area that span over 100 km2. The licences are located next to Debswana’s Jwaneng Mine, acknowledged as “the richest diamond mine in the world by value”, producing over 11 million carats per annum.

The Kgare pipe is the most well understood of the kimberlites at Jwaneng, being diamondiferous, and having returned encouraging mineral geochemistry that is comparable to indicators found in Debswana’s Jwaneng mine.

During the first quarter of 2022 an historic airborne survey was acquired and reprocessed, which resulted in the identification of several new kimberlite targets. In particular, six targets stand out as having coincident EM/Magnetic signatures that require drill testing. Ground surveys to locate the drilling positions are planned for the second quarter of 2022. 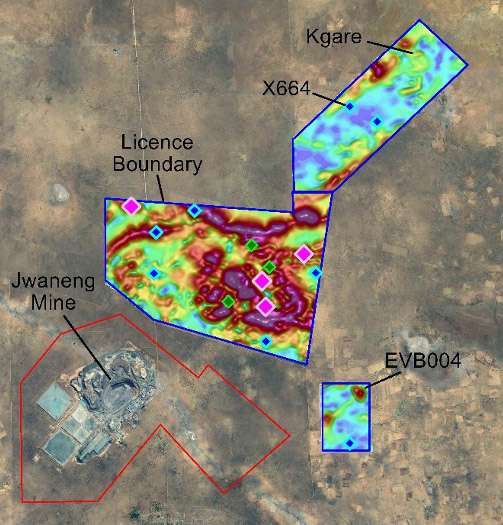 At Kgare, kimberlite indicators, a suite of characteristic mineral grains commonly entrained in kimberlite, are highly encouraging. Two in particular are meaningful in the exploration for kimberlite, namely chromites and garnets, which are used to verify that the kimberlite magma has traversed the diamond stability field, a discrete layer within the earth’s mantle, on its way to the earth’s surface. Today, the science of kimberlite discovery has advanced to the point where well defined “fields” are used to segregate the “positive” indicators. The charts below demonstrate how both the chromite and garnet indicators are suggestive of significant opportunity for diamond discovery.

The chromite chemistry follows both the mantle and kimberlite trends, concluding with a significant number of data points within the diamond inclusion fields, which implies that the diamond potential is high.

The equally promising garnet chemistry, G10 types to the left of the Gurney line, records a notable number of grains above the “diamond-graphite constraint” (GDF) of Grutter (2004). This informs that Kgare has traversed the diamond stability field and that the kimberlite may contains diamonds. 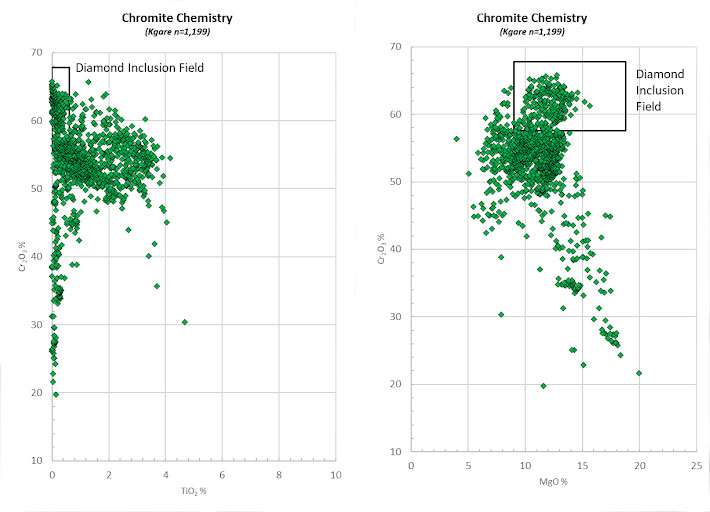 The chromite chemistry follows both the mantle & kimberlite trends ending with a significant number of data points within the diamond inclusion fields. This tells us that the diamond potential is high. 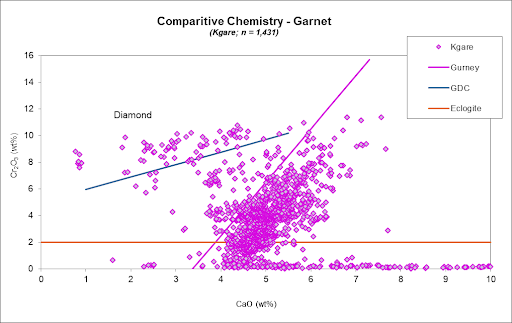 The equally promising garnet chemistry, G10 types to the left of the Gurney line, records a startling number of grains above the “diamond-graphite constraint” (GDC) of Grütter (2004). This tells us that Kgare has traversed the diamond stability field and that the kimberlite may contain diamonds.

Phase 1 drilling was completed in late 2021, with approximately 400kg of kimberlite arriving in Canada for diamond recovery and indicator chemistry studies. A major diamond producer is assisting with a portion of the analysis programme, and these studies, when combined with Eastport’s rock property measurements, will lead to a grade/tonnage and value estimation for Kgare.

Ground surveys in the second quarter of 2022 will characterize a new series of EM/Magnetic coincident targets discovered in the reprocessed airborne data. Meanwhile, small, focussed, low-cost surveys will identify drill targets for the fourth quarter of the year.

Back to All Projects